An idea that became a reality

It was a calling- there is no other word to describe it- when I was drawn to storytelling after reading an article in the daily.

I was reminded of my maternal grandmother who had enthralled me, my brother and my cousin with stories, which she narrated in a simple conversational yet interesting style. It certainly helped us eat more! For it was during dinner as she fed the three of us placing rice balls in the centre of our palms that she would tell us stories of kings, queens, tricksters, animals and from mythology. How hooked we were on those stories! We fed on them more than the rice balls!

Then bam! I lost the connection with the oral tradition which was replaced by voracious reading of books. Though intermittently during my teaching career I did tell stories and encourage students to read story books, I never really thought of “storytelling” as an event. That sacred bond was to return years later when I was in my late forties.

It was an instant connection when I read an article on storytelling in the daily. I took a course on Professional Storytelling, wondering what it was all about. There I realised the strides this simple form of communication was making the world over. Storytelling was becoming big business – the oral tradition which was on the brink of fading, was being revived by tellers around the globe. Fascinating!

Memories of my grandmother and her storytelling flashed across my mind- I took a deep breath and decided that I would do whatever I could to help revive the oral tradition.

I began to hire venues and conduct sessions, I went to schools and activity centres requesting them to host storytelling sessions. I did this under my own banner Tale Spin: a platform for stories which is a social media page (Facebook) that I created to spread awareness about stories and their telling.

And then stories began to carry me to places I did not expect! From newspaper write-ups and magazine articles to TV and radio interviews, to performing on many public platforms including international festivals, stories have given me so much in return. I am so grateful.

With the popularity of storytelling growing in society, I found so many tellers distributed over the city. When I began my career as a storyteller six years ago, there were just four of us active storytellers; two years down the line there were almost fifteen tellers!

But, we were largely disconnected, scattered and bumped into each other occasionally during a public telling.

That’s when the idea of initiating a group popped in my mind. “Why not create a group that would bring all the tellers in the city under one fold? Why not find public platforms so upcoming tellers need not struggle to find one?” 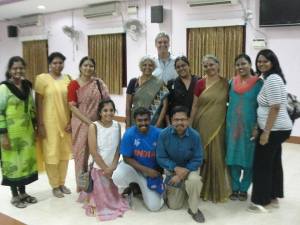 So, I spoke to the few more active tellers who encouraged me to begin such a group and Chennai Storytellers was born in Dec 2015.

It is still a young group but we have close to thirty individuals and it is growing every month. We perform regularly each month on two public platforms in the city. We also have a Facebook page under the same name.

There is nothing official about the group at this point in time. We are individuals who are keen to tell stories and help keep the oral tradition going in the city. We have laid out certain guidelines that we follow, one of which is not using the CS platform to promote individual banners but to project ourselves as a group.

We organized our first CS “mega” storytelling programme on WSD in 2016. It was a runaway success and we came into the city’s limelight almost overnight.

We meet regularly to discuss on future plans, introducing newer individuals to the group, have individual performances and give feedback on improving performance and general performance tips. We also support storytelling festivals conducted in the city.

We plan to reach across the length and breadth of our vast and magnificent city in the months to come, creating more public platforms to spread the joy of listening to stories.

Within the CS group, newer friendships have been forged, tellers have been recognised and have found an identity and upcoming tellers have found support, encouragement and motivation. It is our aim to better our standard of telling to greater heights so we make the city and our mentors proud; so we can contribute to the global revival of this rich oral tradition and make sure that stories continue to enrich all the lives they touch.

About the Storyteller: Asha Sampath is an educator turned storyteller.One who believes in the magical power of stories to connect, communicate and transform. She is passionate about helping revive the oral tradition. 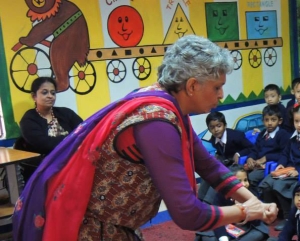 I aim to be a valuable resource for aspiring, emerging and professional storytellers. The Art of Storytelling Journal seeks to open, consider and advance the exploration of storytelling practice. We publish articles on a wide variety of topics related to oral storytelling as a social, cultural or academic discourse, and in a variety of professional and disciplinary contexts. View all posts by aostjournal